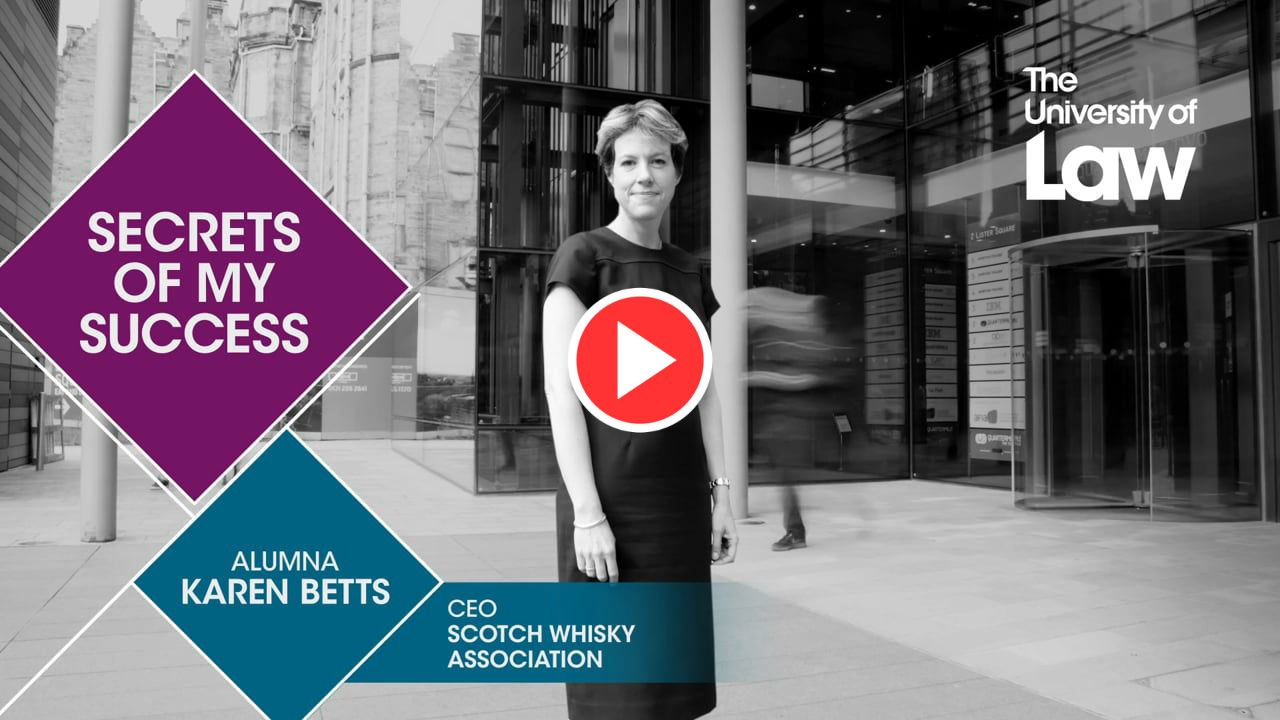 Karen Betts studied the CPE and the LPC at ULaw Guildford campus, graduating in 1997. She has held a number of posts in London and overseas with the Foreign and Commonwealth Office (FCO) since 2001. These included Counsellor to the British Embassy in Washington, and roles at the UK's Permanent Representation to the EU in Brussels and the British Embassy in Baghdad. Prior to joining the FCO, she worked as a litigation lawyer for Clifford Chance in London and Hong Kong. Karen is now the Chief Executive of the Scotch Whisky Association, the first woman in the organisation's 105-year history to take on the role. Karen told us more about her career and how a background in law has helped her succeed.

It was only when I was coming to leave university that I thought about studying law. I still didn’t have a clear idea what I wanted to do.  But law seemed a good, flexible place to start, something I could work at forever, in some shape or form, and something that would enable me to work overseas. I studied history at university; I don’t think I ever thought of studying law at that stage.

My career ambitions were to work hard and do well. I am, in my husband’s words, an inky swot. And I wanted to travel – so over the years, so far, I’ve worked in Hong Kong, Brussels, Baghdad, the US and Morocco. I am a big believer in the power of understanding countries and lives other than your own.

Role models have been very important to me. I have had many inspirational bosses and mentors, including people who have believed in me and invested in me. It’s a good habit, I think, to look at people you admire and think – ‘How do they do that well? What can I learn from them?’ If I had to pick a famous role model, it would be Madeleine Albright. Fiercely intelligent, bold and brave, as well as humorous and gracious.

Meeting the Queen has been the proudest moment of my career so far. When you are appointed an Ambassador, you are invited to a private audience with the Queen. My husband and I went to Buckingham Palace one cold November day, it was a very memorable occasion.

Most days have a chaotic family start, with everyone (I have two children) needing to get off to work and school, and a dog needing to be walked (though I can’t claim credit for that, my husband is our dog’s hero). Then meetings in Edinburgh or Glasgow, with our member companies or Ministers, MSPs, government officials, or with the team in the office. I usually spend a couple of days a week in London (the Scotch Whisky Association is headquartered in Edinburgh, and we have a small team in London too), doing similar sorts of things, and often speaking at conferences or other events. I travel overseas quite a lot to markets that are important for Scotch whisky, such as India and the US. If I’m in Edinburgh, I try to be home in time to help get the kids into bed and to read to them before they go to sleep – which is probably the most important thing I do.

A grounding in law sets you up for anything. Although I haven’t remained a practising lawyer, I know I still fall back on the rigorous approach to problem solving that a legal training instils in you. It’s useful in every walk of life.

If you want to do something different, go for it. To succeed in anything you need to really want to do it. If that isn’t practising straight law, then find something you are passionate about – and take a risk on it (I’m all for taking informed risks). I’d advise anyone to keep on expanding their skills and to keep on learning – and I mean this as much in expanding your people skills, which become more and more important the bigger the role you take on, as I do hard skills. Remember to look up and out, and to find people – whether at work or home – who support you.

Find out how studying at The University of Law can help set you up for success.