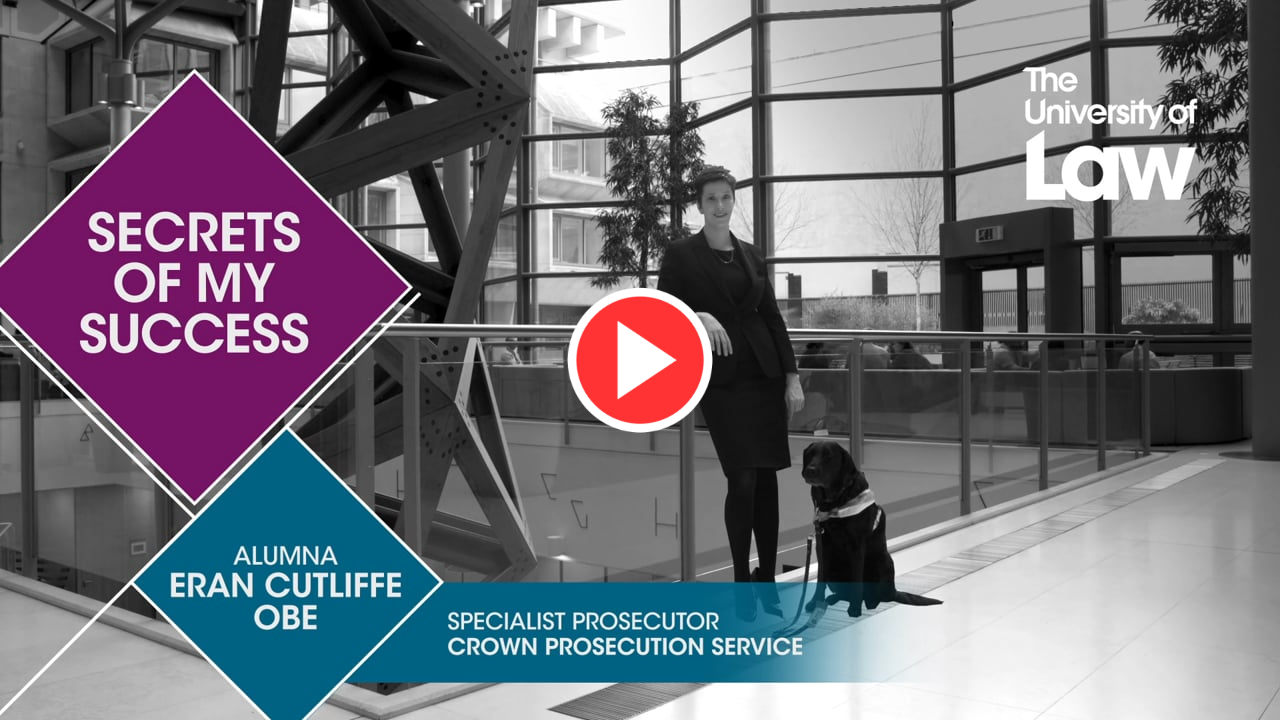 Alumna Eran Cutliffe studied the LPC at ULaw Chester campus, graduating in 2006. Since then she has climbed the ranks from Trainee Solicitor to Specialist Prosecutor for the Special Crime and Counter Terrorism Division with the Crown Prosecution Service. She was featured in the acclaimed legal documentary ‘The Prosecutors’ and was awarded an OBE in the New Year’s honours list of 2019. Many will find this all the more inspiring as she has achieved so much while also being registered blind. With a glowing career both ahead and behind her, we caught up with Eran to discuss her time at ULaw and the cases she is most proud of.

I had a friend who was studying law as an under graduate and she made it sound interesting. I wasn’t sure what I had in mind beyond my initial studies when it came to law. I chose The College of Law (now ULaw) in Chester as it seemed an inviting institution in a lovely location. I kept studying as the world of work seemed something which I would like to have avoided for a little longer.

Initially, when I began working for the Crown Prosecution Service (CPS) my primary goal was to qualify. To be admitted to the role seemed like an impossible task with so many hurdles to jump. I very much wanted to work building complex cases as watching senior lawyers deal with pre-charge work seemed fascinating. Since achieving these primary goals I now want to share my experience with colleagues and stakeholders as well as encouraging people to get stuck in and achieve their goals whatever they might be.

Currently I am a Specialist Prosecutor based in Special Crime, which is part of the central casework division ‘Special crime and Counter Terrorism Division’. I advise the police on a range of offences including: assisted suicide, corporate manslaughter, and manslaughter by gross negligence, election offences and anything that is considered high profile. My work is heavily based on expert evidence. Also I am responsible for quality assuring work from other areas that relates to grossly offensive communications and private prosecutions.

When I was involved in The Prosecutors, the documentary team came into West Midlands which was the area I was working in at the time. The team were looking for cases of interest that would sustain an hour of film and with prosecutors who were contact to be filmed. The team followed a huge number of my cases as well as those owned by other colleagues but it just so happened my cases were the ones chosen. The filming process was quite exposing but I just took the view that I would do my job and they would be welcome to film whatever they liked (including the good the bad and the ugly).

When I found out that I was to be named in the New Year’s honours list of 2019 I nearly fell over. I thought it was a joke as I had no idea that I was to be nominated or by whom. I now understand that my work on a number of cases had been identified and which subsequently form the basis of my nomination. It was a huge honour that casework was to be recognised but it seemed very strange that it was in fact me and my cases.

I was very proud to be the first to secure convictions under the Modern Slavery Act 2015 for offences involving children. Not only has the conviction resulted in a number of children remaining in social services care and being able to rebuild their lives but also the case received considerable publicity and instigated conversations in society at large and hopefully safe-guarding many more children.

Another one of my most interesting cases was when I worked on a matter involving the importation of half a tonne of Benzocaine from China. I worked with the police to identify addresses to which the Benzocaine was being delivered, used surveillance methods to identify where the Cocaine was being cut and dealt and was able to charge 14 people across two conspiracies. The case was of interest because Benzocaine is not illegal to import but clearly given the quantity it wasn’t for a horse with a poorly tooth. It was a case put together from many parts of the puzzle and confirmed my suspicions that I very much enjoy building cases from the ground up.

Every job brings with it times of pressure when the balance shifts in favour of the case in hand.  However, flexible working is encouraged and it is simply about prioritising and planning.  Currently, I am actively encouraged to manage my own case load, timetable appropriately and communicate clearly when issues arise.

To be successful in my role you need to be analytical, objective and able to think laterally, as sometimes there is more than on way to ‘skin a cat’ so to speak. Above all you need to be driven and prepared to stand by the decisions you make.

You don’t have to have all of the answers at the start of your career and the day that you think you know it all is the day you should not be a prosecutor. CPS offers a variety of roles within the field of criminal prosecution and it is far from a one trick pony. If you are keen to be a Prosecutor you need to think how cases would be attacked from the Defence perspective, so it is not about having a narrow mind set. The more experience you can develop within the Criminal Justice System the better you will be as a Prosecutor.

I applied for my training contract as part of the national recruitment campaign. I did discuss matters with the University careers department but acted independently of them. I have since applied for a variety of jobs within the organisation, moving through teams as well as progressing through the grades.

During the course of my studies my post graduate support allowance to assist me with accessing materials ran out. I was supported financially through ULaw and systems were put in place to ensure that I could continue my studies.

Deborah Ashton was my personal tutor and very much inspired me during my studies. She had a calm driven attitude that depicted the art of professionalism. She also demonstrated extreme kindness and understanding toward me when I was undergoing personal difficulties.

ULaw confirmed for me that I actually wanted to be a practitioner. I developed confidence in skills that I didn’t know I actually possessed. ULaw gives you a safe space to experience a variety of skills needed to be a practitioner. Through the electives you can understand areas of interest and perhaps those that you initially expected to be ones of interest might not actually be.

For any disabled students looking to get into law, do not let anyone judge you or make assumptions about what you can or cannot do based on your disability. You have to work hard and be good at what you do. I never want to be known as Eran the blind lawyer but rather Eran the good lawyer. If I could give my 18 year old self advice, it would be the world is not quite as scary as it initially seems. Being told no doesn’t mean give up and go home but rather it means prove them all wrong.